I wanted to have more Buick, than what got from Electra estate, and then after thinking a while I deciced to sell my Caprice '79. But finding a LeSabre coupe '77 - '79 was not an easy task.
I searched Ebays, Hemmings, Kiijiis and Craigslists and not found about anything.
Then here in Europe I found from Mobile.de the pretty good example. I saved the freight from USA and some custom fees and taxes. The car is from Pennsylvania USA first imported to Netherlans (Holland) and I drove it from there to Finland a week ago!

Or what do you say about 29'000 miles driven 1978 car? For me it was a surprise I am a still happy about. I had seen 105 photos of the car and the surprise was, that they were exactly as the car was.

The only problem is, that I have to change my plans! I had thought, that I will immediately remove the vinyl top. Well, as "live" it does not bother so much anyway, and there are now several people told me: "Do not touch that roof!" - the car is in too good shape.
Then the technique. I have reserved and promised to buy the whole LT1 engine+transmission, but I have already deciced not to put it to this car! Not any extra relays, computer, wirings for this original car.

But ok, at least couples of things I still am planning to do:
-The F41 or similar suspension.
-The engine perhaps to 403 (with 350 heads to increase compression ratio)
-The Buick 5-spoke wheels, below is the photoshopped wheels, but the photo otherwice is as the car is.

Thanks for positive feedback for you guys!
Yes, I have never owned such "time capsule", but just read about those.

Few photos of 105 total photos made me to decice to go to pick up this using taxi+bus+flight+train x 4 and ferry besides driving a car, about 1200 miles from home.

This one of the photos. You who have seen the GM thermoplastic paint know this ain't very bad for original paint..

This dash was the main reason for wanting to change from Caprice to Buick. I know it is not real wood, but I just do not care that much, so mostly because of these scene I have always front of me when driving was the reason to obsession for Buick!


And you know the huge doors also from Caprice coupe, but for me they were bigger than in my El Camino were, and I am happy for the practical frames of the door after hearing about 9 years wind blowing from the weatherstrips of the El Camino!


You see also those couples of cartoon/paper instructions telling of using seat belts or hazard lights still existing... who owns the car 38 years without removing this kind of details?
And I do not think they have been any "dealer reprints", because there is under the hood some same sort of markings of times when next services should be done as well as many pages of services done, even low miles.


One really question mark I do have anyway: I have not seen the ANTENNA anywhere, even there is a AM/FM radio! Not a whole, nothing. I thought it was suppose to be located in right side fender?


One friend told, that a pretty long time has been gone, when he has last time seen this "keep your GM as GM " sticker on the air filter. The only rust place is the main cylinder of brake and a two spots on the valve cover. Not rust elsewhere yet I have found.


The floor moldings "Body by Fischer" I did not much noticed from the photos, but when I saw that in a real life, I understood not many foot or boots had "crashed" these. I have not seen this good moldings in these B-Bodys, or other GM:s so far.


So I really must say I am pretty happy guy: when wanting some car, and then finding this kind of example, it is like as a kid at the Christmas or Birthday,  you know the feeling.
Hope I can anyway really share some joy to you others too. My advice: keep your focus on some dream, even a small one, forget the "general rules" of "TOP 10 what to buy: Mustang, Corvette, Camaro..." (or my neighbours who wondered why to pick up anywhere 1978 car instead of some "real old classic")  and do take a risk to pay advanced payment, and organizing the things to get your dream be true and you might succeed! Yes, I know this is not a 1940 Lincoln Zephyr or 1963 Jaguar E Type, but such vehicles I couldn't afford about ever besides not many classic cars as I think this is, which is so nice to drive 400 miles at one tank stop! 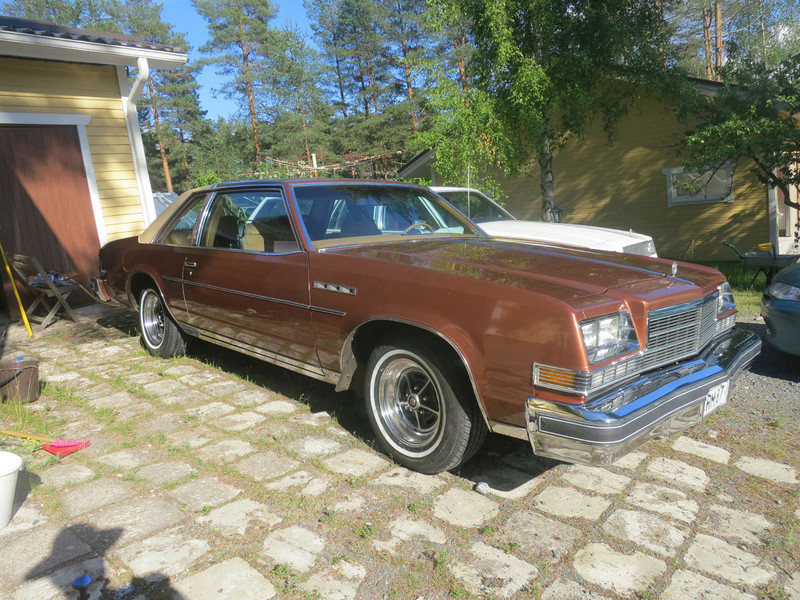 Some kind of problems I had at first summer 2014, but after that, "works like a dream"! I had driven in Germany with air leak in intake manifold, the car had not good idle. Then strange thing, when that "purge canister" put that "coal" to carburator and it affected a very lean mixture and as a concequence the catalysator was kind of burnt... But luckily after that "first summer" then the car has been working with not harm at all!

I found those correct Buick Rally wheels, they are not so common: 15" and small GM pattern 4.75" (in Skylarks they were 14" and in full sizes and Rivieras they were big pattern)

I had here in Finland one small event, where I collected 23 pcs of Buicks (all ages, just it had to be Buick) and drove a weekend here in Finland and so on... But even people with older Buicks noted, that ok, they made still cars in 1978, not all of them were Plymouth Horizons or Chevrolet Chevettes..

In this year 2017 I thought for awhile, that because my daily driver - Jaguar XJ40 - was not the best condition car, I thought, that if I just would sell the Buick and update the Jaguar... I took a "sales photos" of my car... thought it over again ... and found a perfect owner to my Buick - Myself! I did not put the car for sale and after this decision I have been very happy owner of my Buick.

VERY nice LeSabre! I have the Electra Coupe with the 403