I have a Mysterious Leak in the Passenger  Footwell a puddle forms in the floormat. Source unknown?

I don't see water or moisture above it at the windshield?
HeavyChevy77

Heater core
To stop the leak by pass the heater core
There are 2 hoses that run along the passenger side to the heater core
Run the hose coming from the left front corner of the manifold (most likey the heater control valve it'll cool the engine same but won't have heater) to the water pump and done.
The heater core should be on the passanger firewall and not behind the dash like other cars.
Hope I helped
GM B-Body Forum 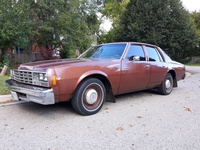 Yepp mine leaked too right at the firewall to heater box foam seal.

On another Canadian classic car fourm that I frequent, someone found a GM Oshawa released TSB for the 1977-78 sedans and coups built at that plant that explained how not enough sealant was used and a new larger thicker gasket was issued to all dealers of the affected VINs
Myloth

Can I replace the box from in the car? If so I'll buy a new seal and heater core.


Slightly off topic but why waste space anyone have a pic of the ashtray assembly with the light?

Too many parts laying around can't find what I need.
solo79

Myloth wrote:Can I replace the box from in the car? If so I'll buy a new seal and heater core.


Slightly off topic but  why waste space anyone have a pic of the ashtray assembly with the light?

Too many parts laying around can't find what I need.

I would have to say these cars are probably the easiest heater core to change I've ever done. You simply get at it from the engine side. There's no need to go inside the car and take out half the dash or the whole dash like some cars. You'll just need to separate the top of the air box and it's accessible right there. It's held down in there in a metal frame with a couple of bolts and it pulls right out. While you have it all apart, you can re-seal the box too. If you want to re-seal the entire air box, you'll have to pull the passenger wheel well and fender.
_________________
1979 Caprice Classic Carmine Metallic 2-door 350/TH350 -under slow frame off restoration!
1982 Pontiac Trans Am Black T-Top 327/TH350 -Knight Rider KITT replica
1989 Pontiac Firebird Black T-Top 305/700R4 -nice sunny day daily driver
1997 Chevrolet Silverado Ext. Cab 3rd Door White Vortec 350/4L60E
Sweet Seventy9

It's the glass then I checked last night(plain water) it's a bad seal . I can try and cob it though for now car is

running good for the moment the new rearend seems solid. I thought the core was ok heat seems good except it

took forever to warmup I just changed the 160 thermo to 195 for the winter now it warms up quick. Yeah I'll just

reseal in the spring properly if needed.
Myloth

Am I missing something here or no seems odd there isn't some kind of cover something?

nope. that's all that's there.

but none for the 77-91. That grill\vent does that just let water go down past the firewall to the ground?

Did you change that seal for the Heater Box or no?
Sweet Seventy9

IIRC, the whole heater box wasn't removed, only enough fasteners were removed to allow enough space to switch out the cores. It was sealed back up with automotive seam sealer.

I'm not 100% positive, but I think that vent/grill area has to do with the air intake for the blower.

I still can't see where the water is coming from but it doesn't seem to be the windshield at least on top section.

I can feel moisture underneath the dash on a piece of the vent though. It leaked when snow\ice was on melting

where the wipers are. Not a lot though there was more when it rained.
Sweet Seventy9

just to see if that's true thanks for the steer.

ARRGH everything including the pillar is bone dry no rust, no moisture I even checked the entire strip of

insulation under the windshield can't find a drop frustrating.
Myloth

Caught in the Act!

I caught the drip today in the act! It's coming from the insulation below the heater box which means it's leaking from the heater box. I suspect the ice is getting into it then melting into the car as the car was warm inside from the sun (it's 33f here).


Anyone have condensation trunk issues? I'm getting massive condensation on the bottom lid of the trunk was there an insulation liner(none on mine)?
Sweet Seventy9

I don't think any of them came with trunk lid insulation.

» Why Italians Pass Handguns Down Through Family!
» NFL Game Pass
» forward pass or not- How do we make it fair
» Club Pass Player Rule
» club pass rule
Current date/time is Fri Jan 24, 2020 8:18 am