So last year i picked up a 77 2 door impala, transmission only had reverse, typical th200 problems, got it dirt cheap abandoned at a buddies house by one of his previous work employees. car has not been plated or driven since 1995. I went to get a title and was able to track down the last owner and get her to sign it over to me without paying anymore $$ or having her reposes the car from me, even made a friend out of the deal. so last year was a busy race season and didnt get to work on it much until December/January of this year, put a battery in it and set of plugs and she fired right up.  car was originally metallic gold with tan interior and someone had it painted some time back in the 90's to white.  has some rust but not too bad for my overall goals with the car.
Initial problems:
transmission only has reverse
no battery
no door/trunk or ignition keys (needle nose pliers to start it)
column tilt bolts loose, broken lever for cruse and turn signal. (no turn sig stalk)
door hinges worn out, no drivers interior door handle, driver door window falling off the track.
incorrect radiator wire tied to support,
missing rh filler marker panel in the front
and busted lh rear tail light housing.
cobbled together dual exhaust riding on the rear axle

defiantly a little project but nothing major,picture from sitting all winter

after the snow melted

" />
didnt like the raked look, too 1970s muscle car look so i changed it and bought a set of basset racing wheels and some 265/60/15 tires (my dirt mod tires on it but these are the wheels for it)

installed the first th350 trans that was a parts trade my brother did. lasted about 30 minutes then the pump quit , it was free so no big deal we werent out any thing, but did get a free core out of it so that was a plus, work got busier so we loaded it up and took it to my brothers house because our shop at our house is full of racecars

so then it begain after waiting 8 weeks for my transmission builder to build me a th350 for my liking and giving me endless excuses as to why its not done i got it and finally got it put in last night, still had to buy my own converter because we wouldnt make good on our deal, but the car did drive so i was a happy camper at 11:45 last night, did had to buy another battery this time a red top optomia.

few weeks back while waiting on the trans i went to the junk yard got a tilt/telescope column out of a 88 park ave. $35, plasta dipped it black and put it in. cut out the old exhaust and took the door panel panel apart put new interior handle in and fixed all the panel clips, put new rollers in the window track and put it back together. 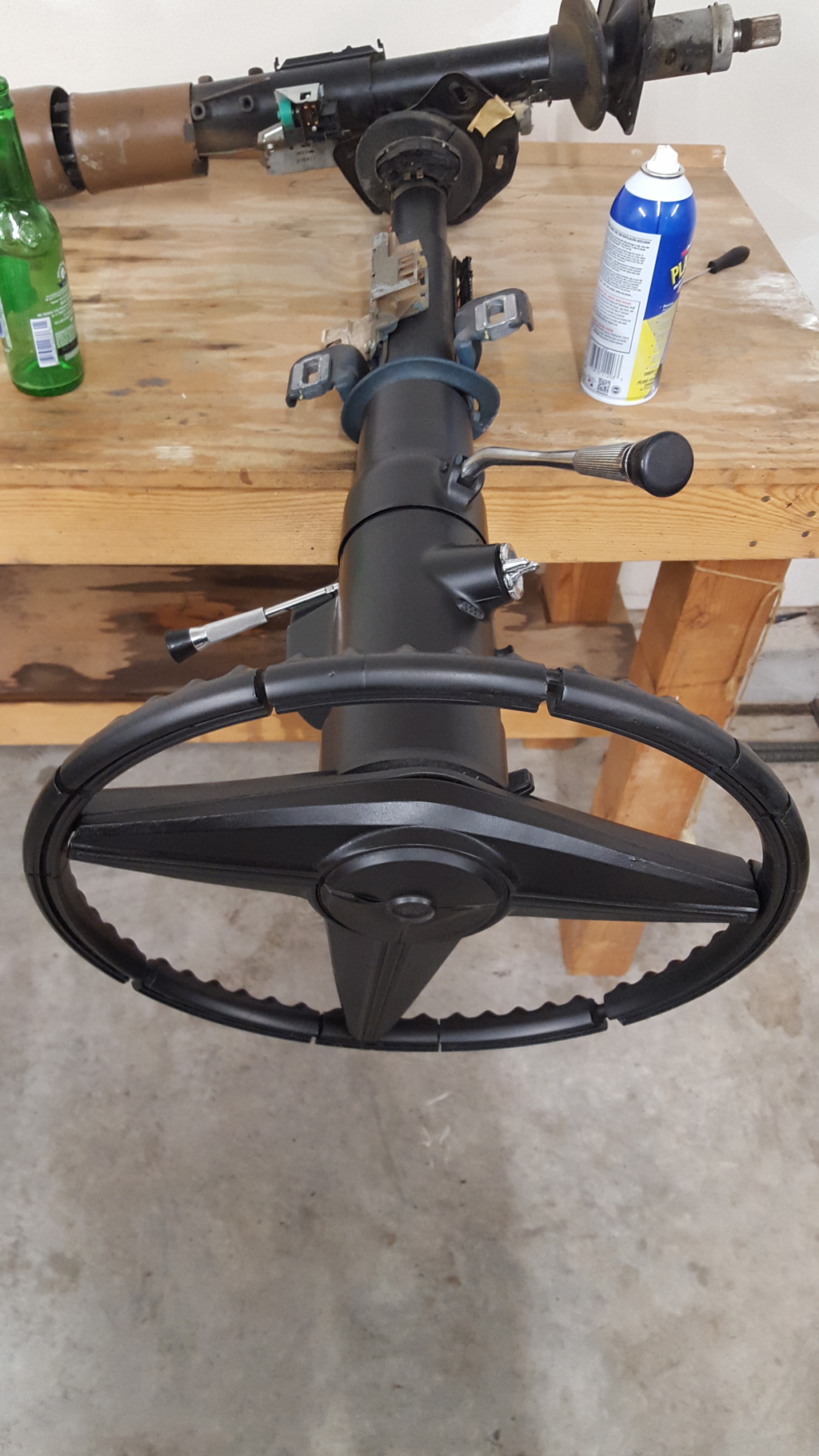 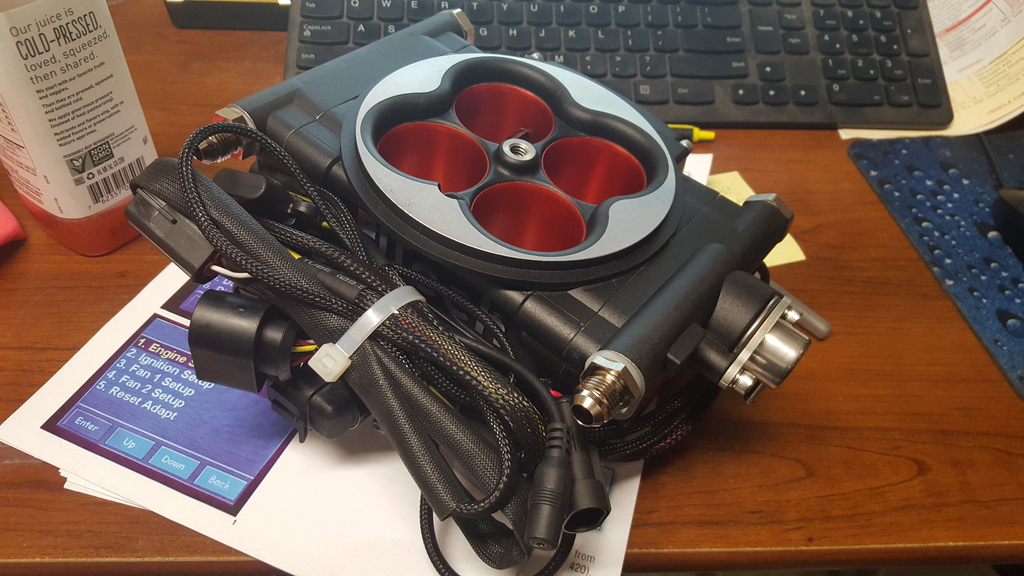 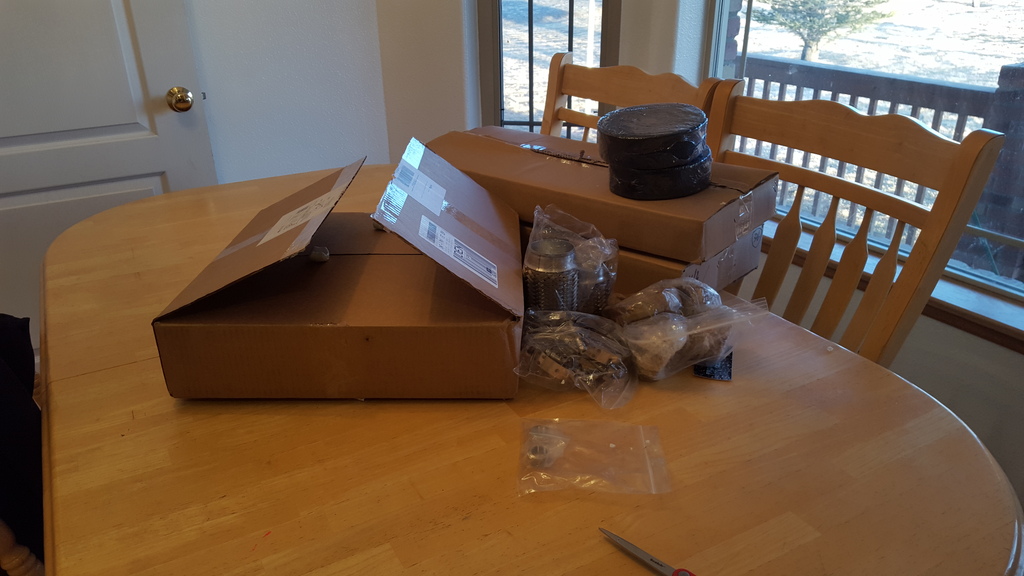 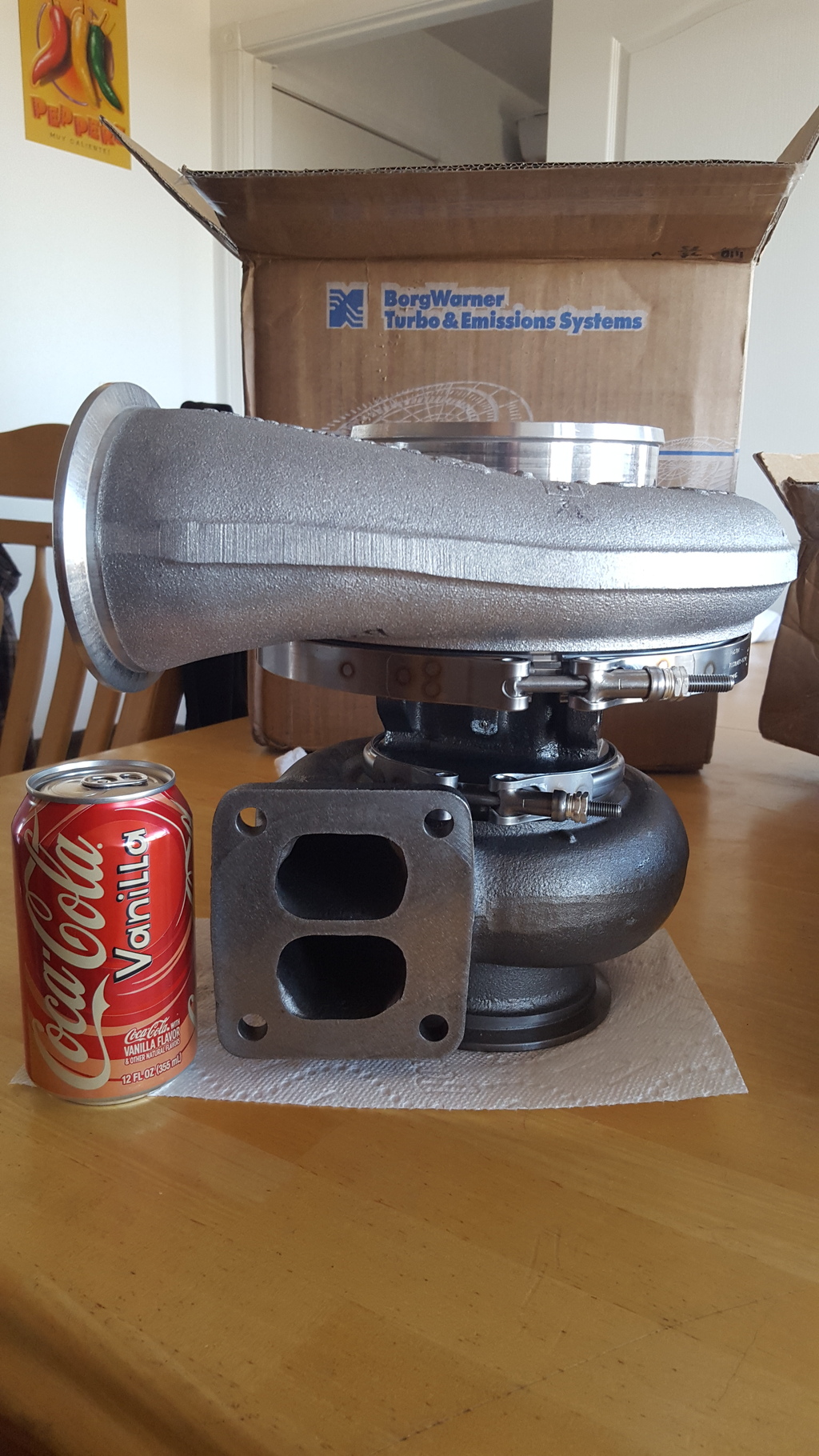 i love racing junk and yellowbullet forums picked up all of stuff for dirt cheap
even got this new 40mm wastegate for $140 retails for 300, 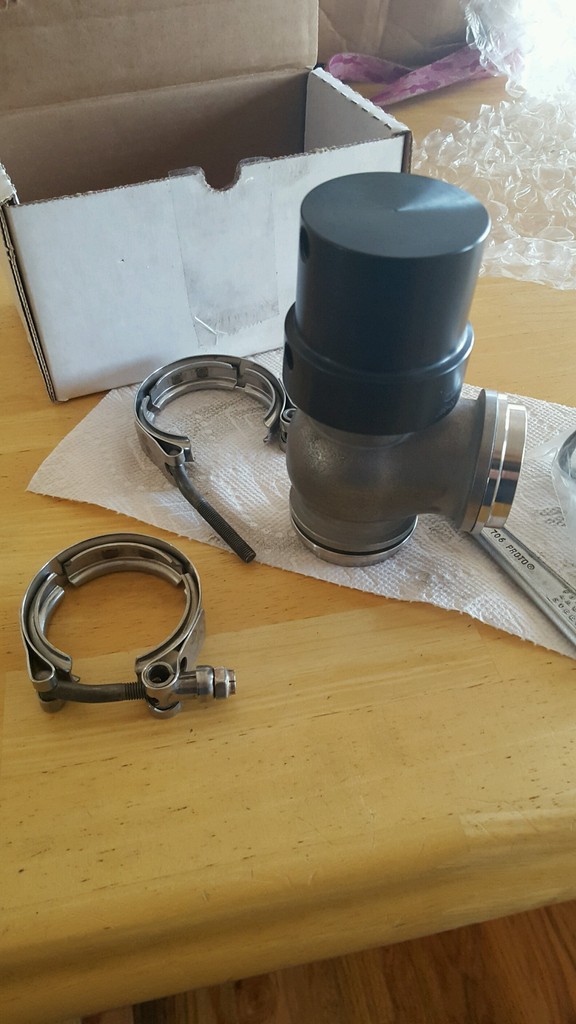 should be a fun little sleeper, excited to not have to worry about the car not starting in the winter with a carburetor anymore
_________________

I have a 77 impala roller asphalt super stock that im trying to sell but first  im swapping the front bumper with and door hinges with this car since those are in mint cond. on the roller car 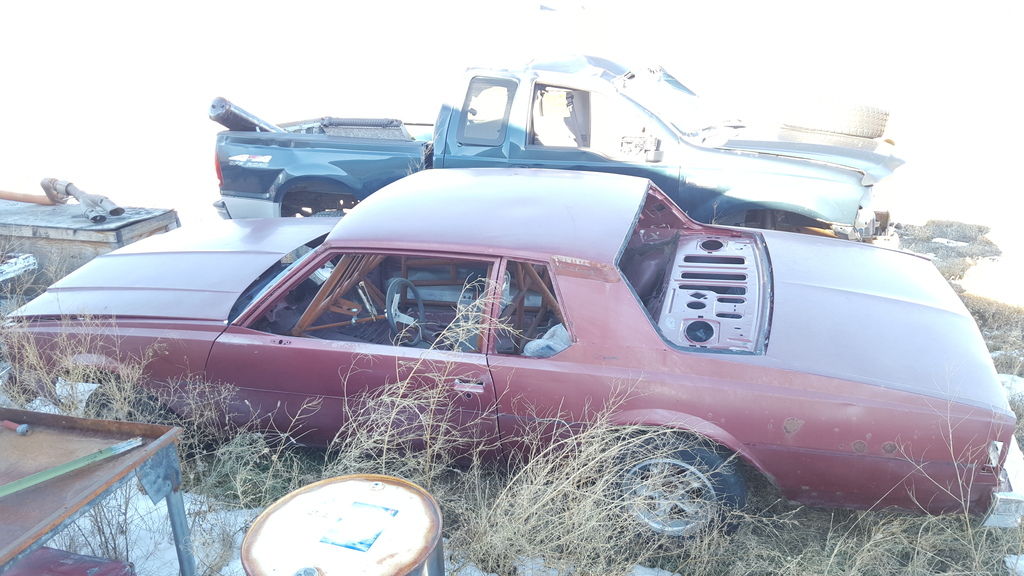 GM B-Body Forum wrote:Hey looks great, im going to purchase that exact fi system, pretty cheap compared to the others. So let me know how it works for you. Keep us posted!

wouldnt recommend any one else but them. about 2 months ago i bought this kit and it was the last one in the country actaully it was the sema showcase piece and they sold it to me just to apease the sale, this is the go efi power adder 6. Then i waited 6 weeks for there inline fuel system kit and it was worth it. Ken kept updating me every week on when it would ship!

GM B-Body Forum wrote:Hey looks great, im going to purchase that exact fi system, pretty cheap compared to the others. So let me know how it works for you. Keep us posted!

GM B-Body Forum wrote:Yeah i know theyre on back order, but the reviews have been pretty good, im pushing around 400hp well if i could ever get the carb tuned right, ive been fighting with it for months. Seems the.more power your making the harder it gets to tune. When the motor was stock i bolted on a holley 600 didnt have to touch anything ran perfect. How much did the complete system cost with the fuel system?

got the intake swapped and started mounting and wiring up the throttle body this weekend. 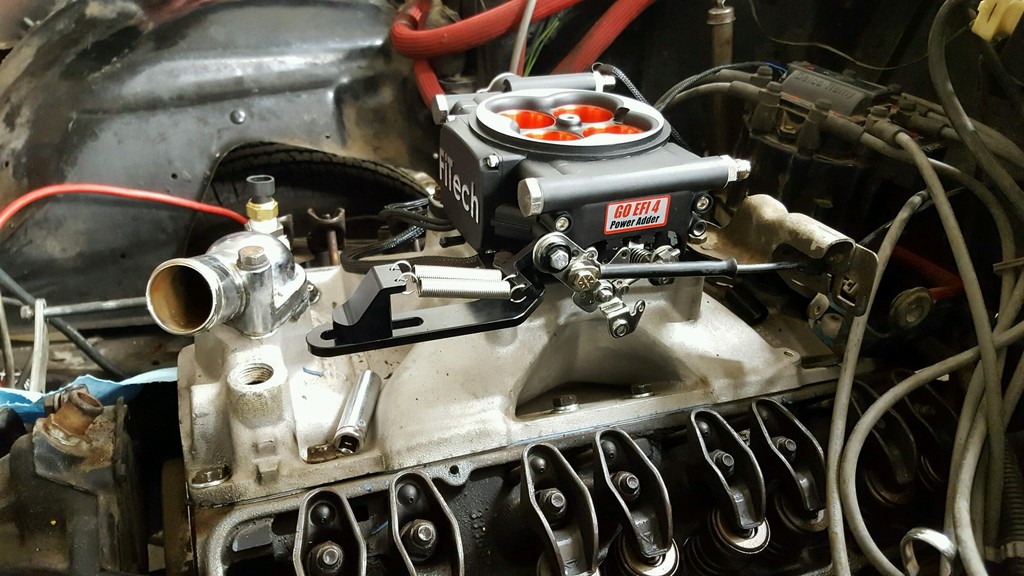 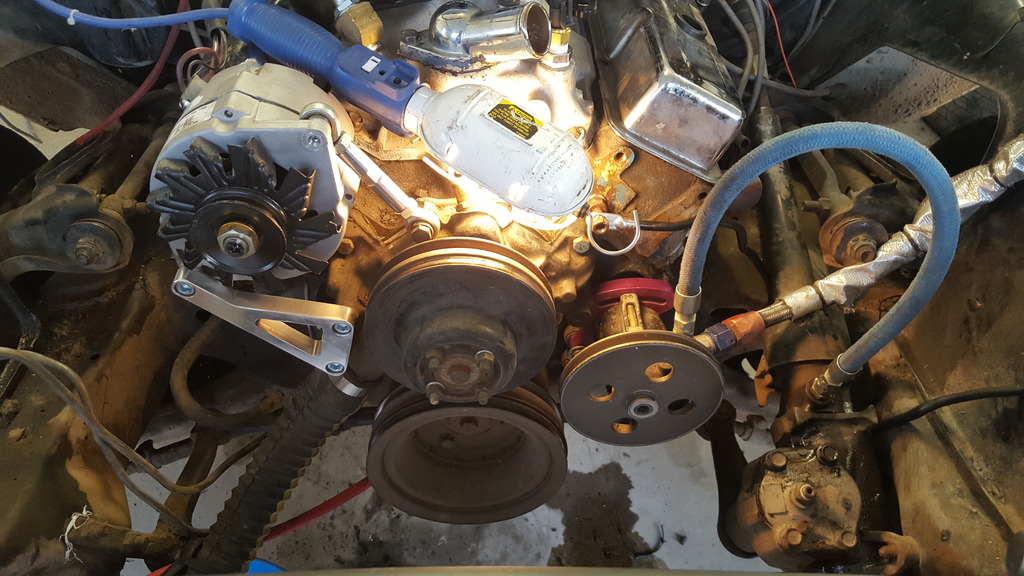 "
Rerouting my powersteering and got the header reinstalled an radiator brackets made up an mounted the electric fan an wired the entire car for the efi kit.
_________________ 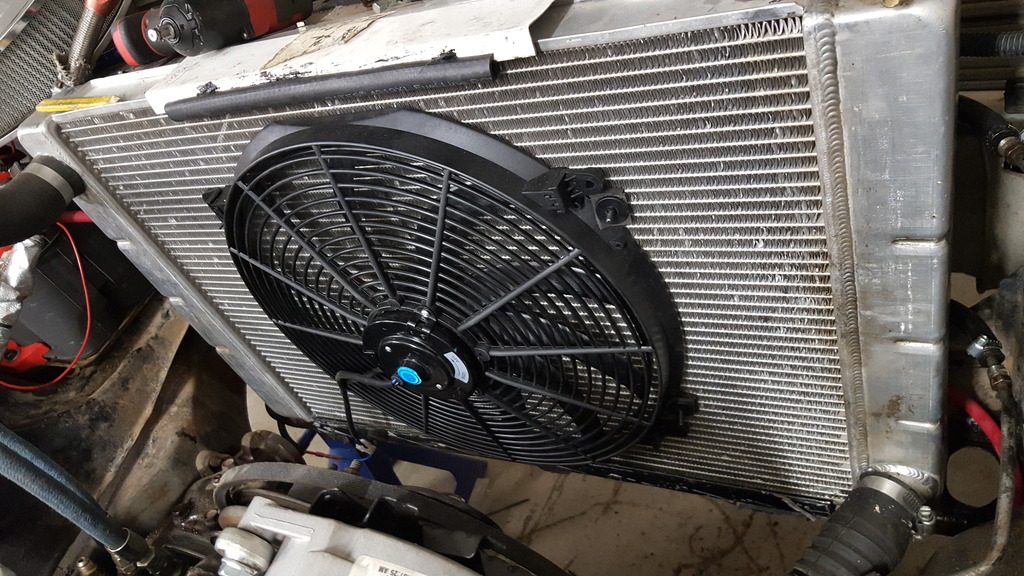 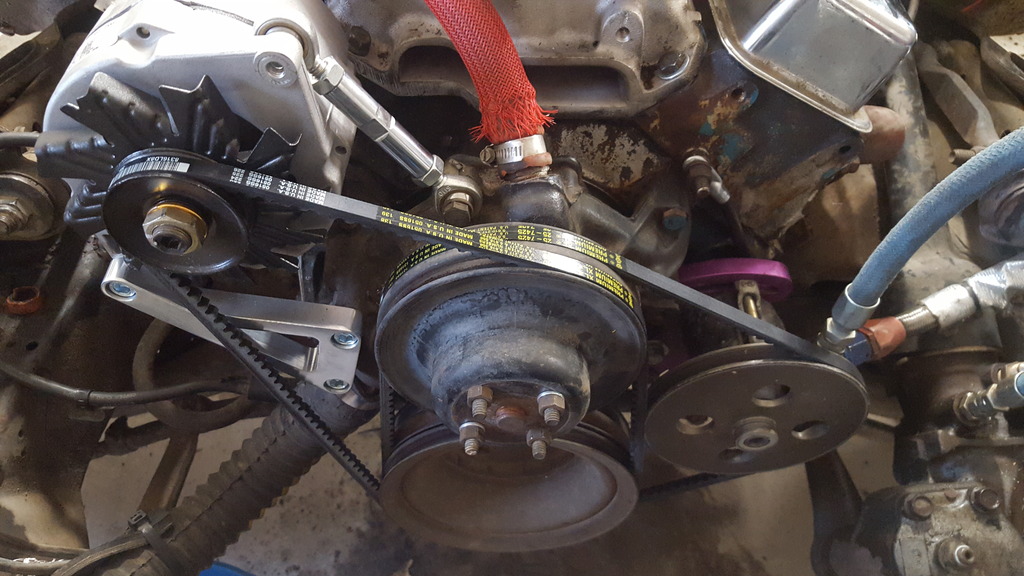 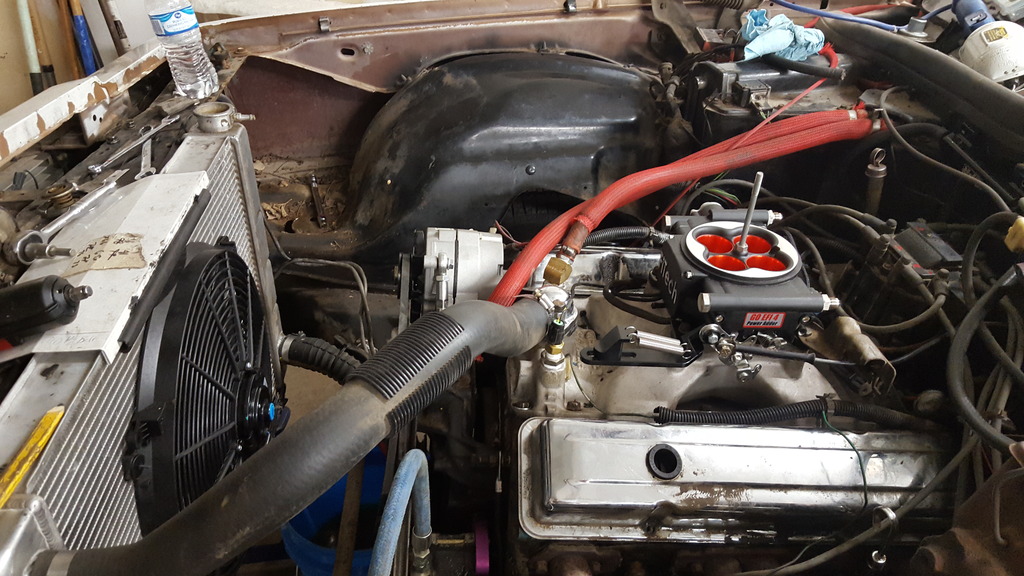 so clean on the right side now 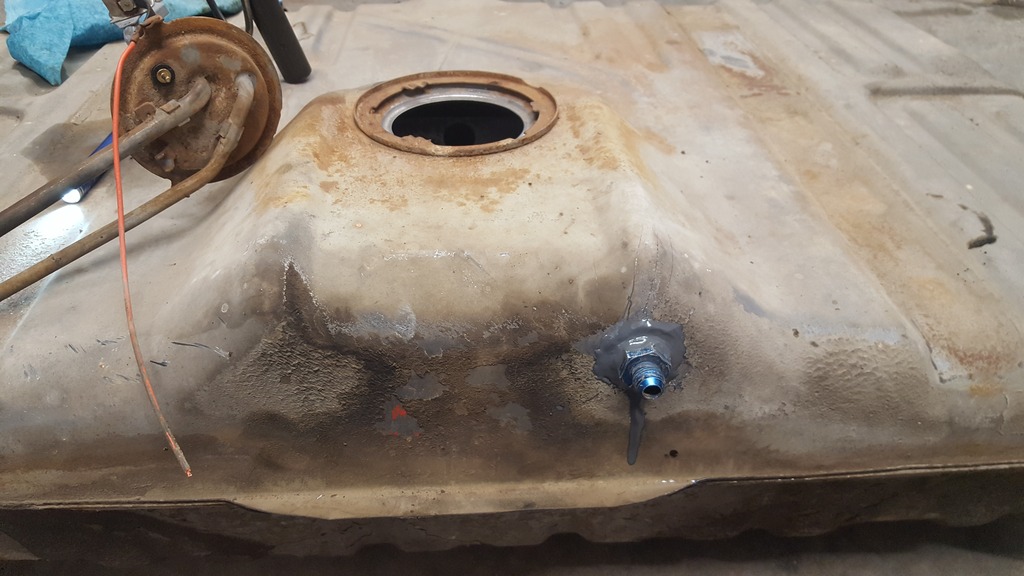 How is it running now any details you can offer?
Fierro51

Myloth wrote:How is it running now any details you can offer?

it's running ok.. fought fuel issues at first then they went away now they came back again... had to small of a fuel pickup (factory 5/16) so I pulled the tank and put in a 1/2 pickup.. helped with the fuel pump howling but with the PWM upped on the pump it still howls more than I think it should.. I'm using the fi tech inline system and I think I'm gonna swap to a a1000 pump and see the difference..
messing with accelerator pump and little time ming adjustments to get the dead spot figured out
_________________ 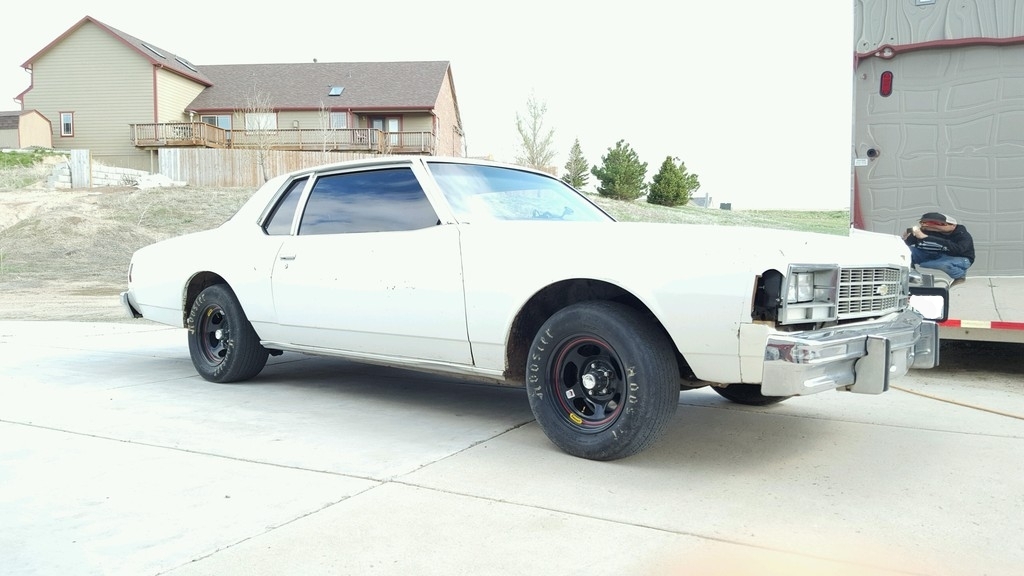 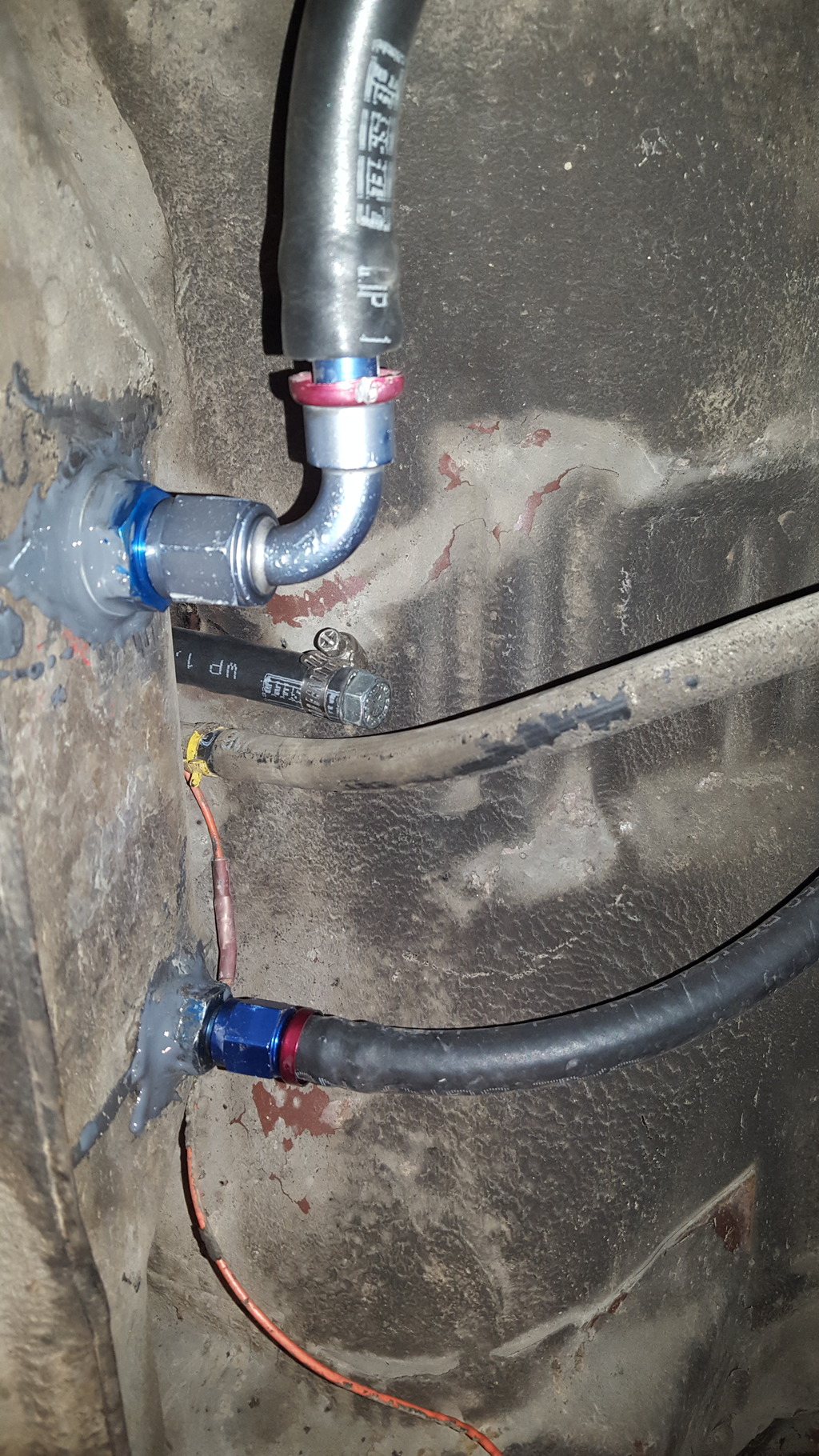 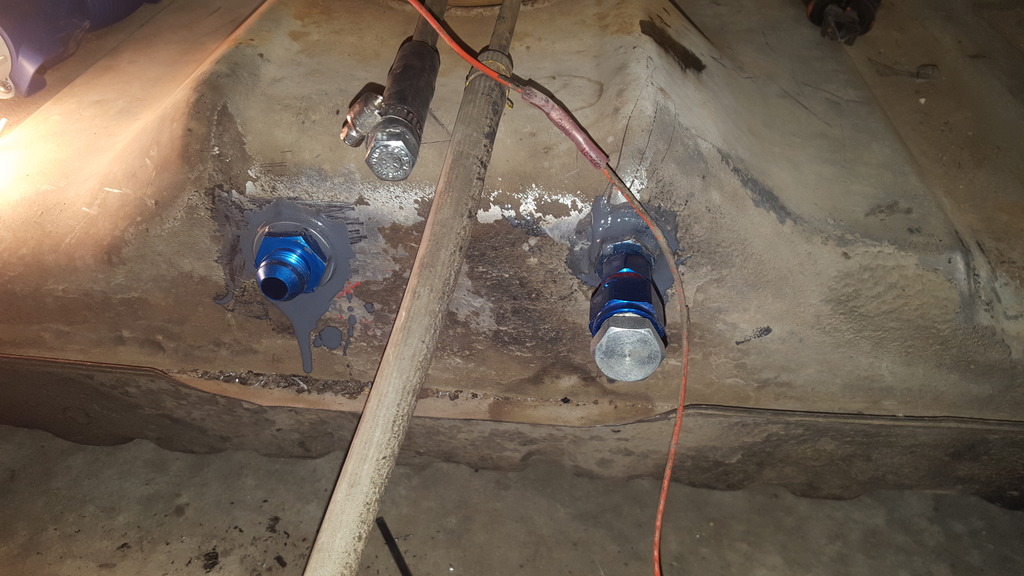 Looks like some great work done there with the lines.

Where did you get those Hoosiers?
Fierro51

Myloth wrote:Looks like some great work done there with the lines.

Where did you get those Hoosiers?

lol they are hoosier G60s, off of my imca sport mod.. only tires I had at the time to get the car home. haven't put the set of tires I bought for it on yet.. driven it on the street for almost 2 weeks and no one has said a thing 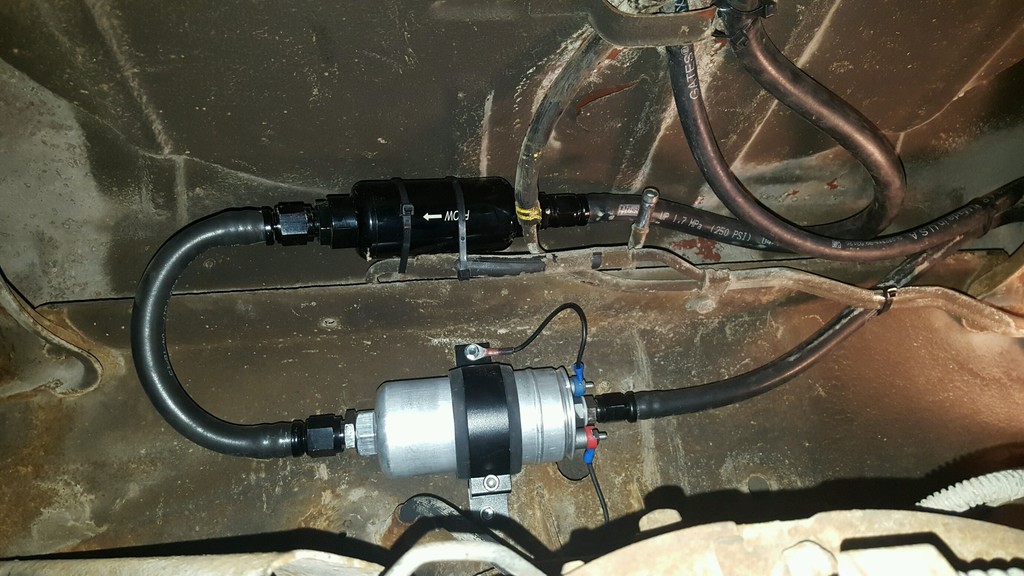 been driving the past 3 days cleaning out the fuel filter 3 time a day to keep fuel pressure up. dam tank was spotless when i did the bulkhead fittings.
fuel pump still has some oscillation to it at times
_________________ 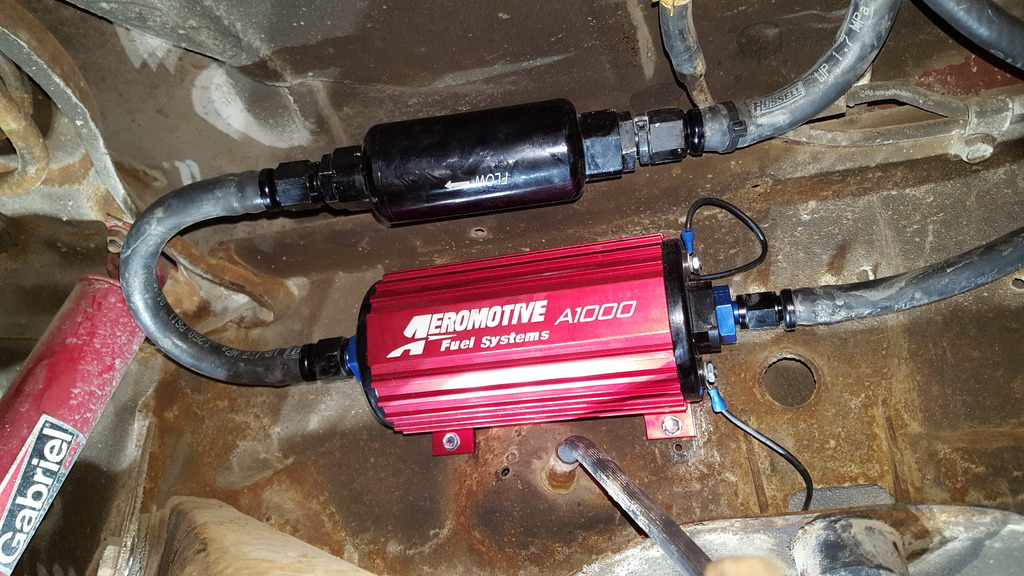 It's been a box in my garage for 6 plus years