I started this project early last spring as soon as I got the car out of the garage after putting it away for the winter.  Unfortunately it turned into a much bigger job than I anticipated and much of it got put on the back burner in favor of other projects.  When I got the seats and the old carpeting out I found it was saturated even though the car hadn't been outside in six months.  That was my introduction to the common leaking heater box issue that is apparently so common on these cars. I pulled that assembly out and resealed everything following the advice found here in several different threads.  Fortunately the rust under the carpeting wasn't too bad, but it needed to be fixed before putting the new carpeting in. 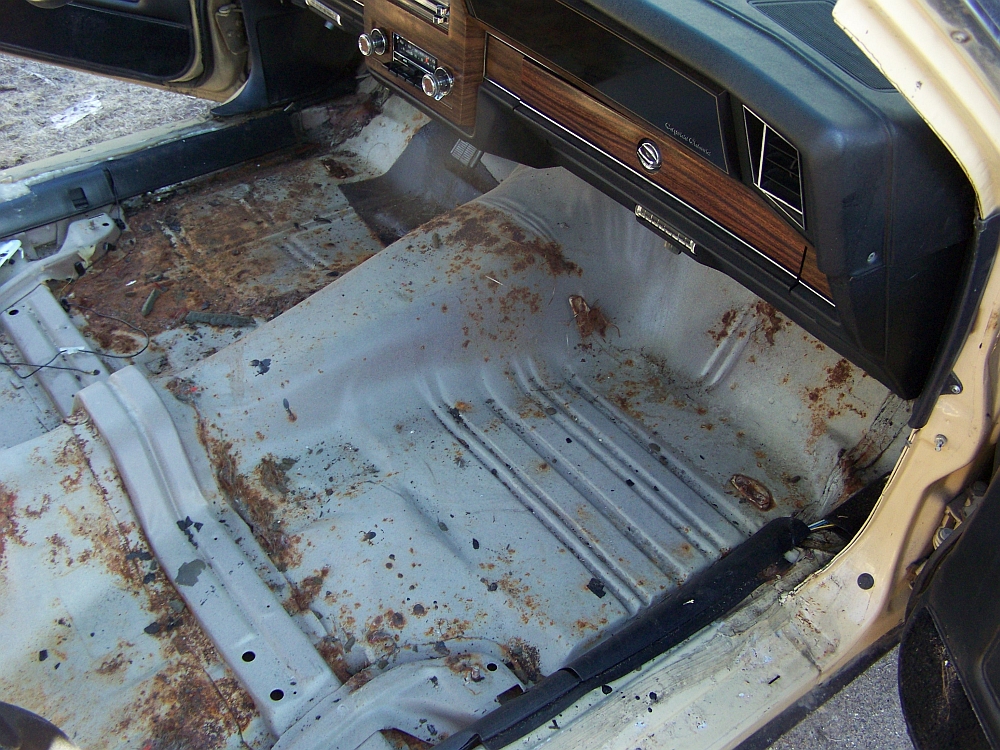 I removed as much of the rust as I could and used a rust encapsulator from Eastwood to hopefully seal up anything that was left.  I'm skeptical about it but time will tell how well it works.  On top of that I put some spray-bomb spatter paint to make it look halfway factory even though it will be covered with the carpeting. 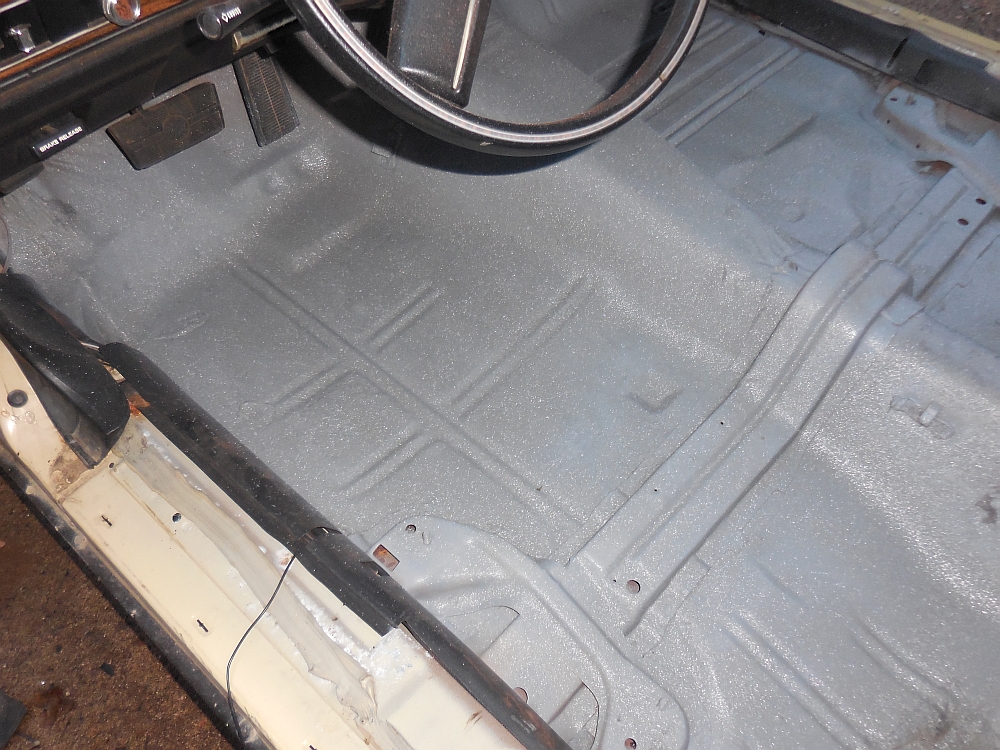 While I had the seats out I was able to get the headliner cardboard out of the passenger front door so I could replace the headliner material.  I posted this a while back in a different thread about headliners I believe. 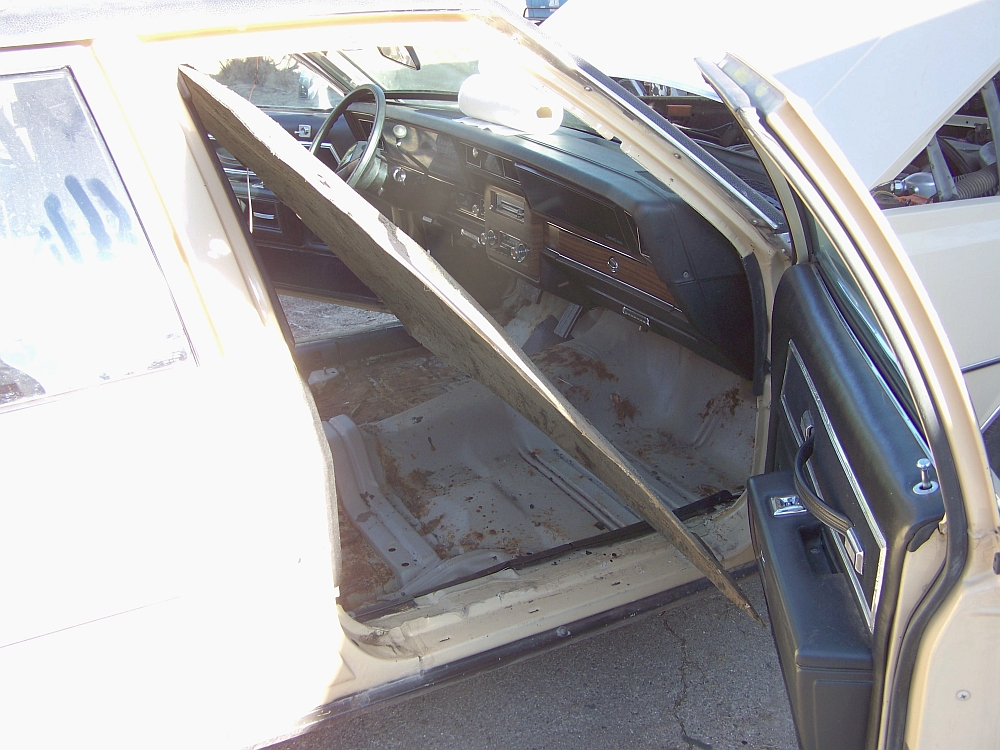 I got my new carpeting and headliner material from stockinteriors.com and I am happy with the quality of everything I got from them.  I've been working on this a little bit at a time and I finally got everything trimmed and fit enough to get the front seat back in so I can move the car around easier. 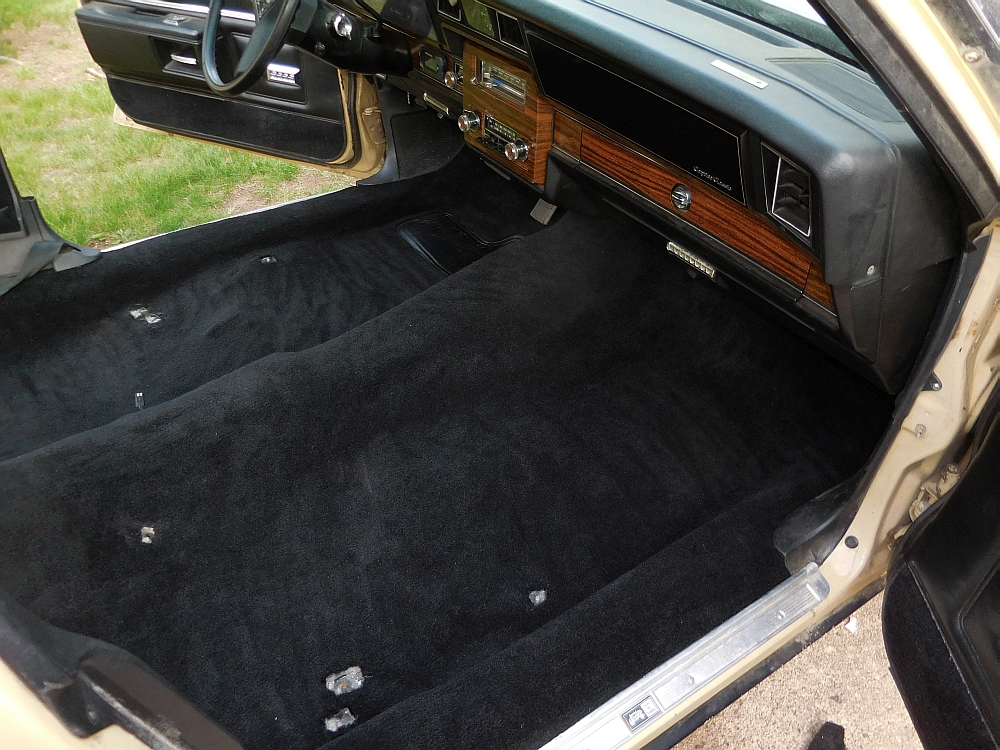 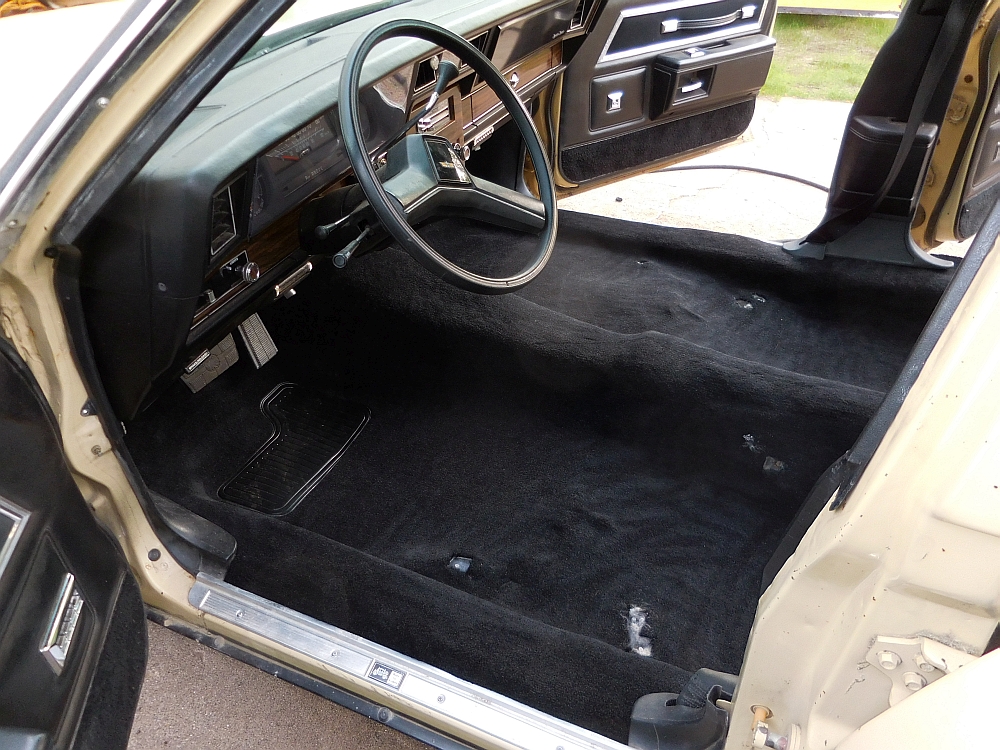 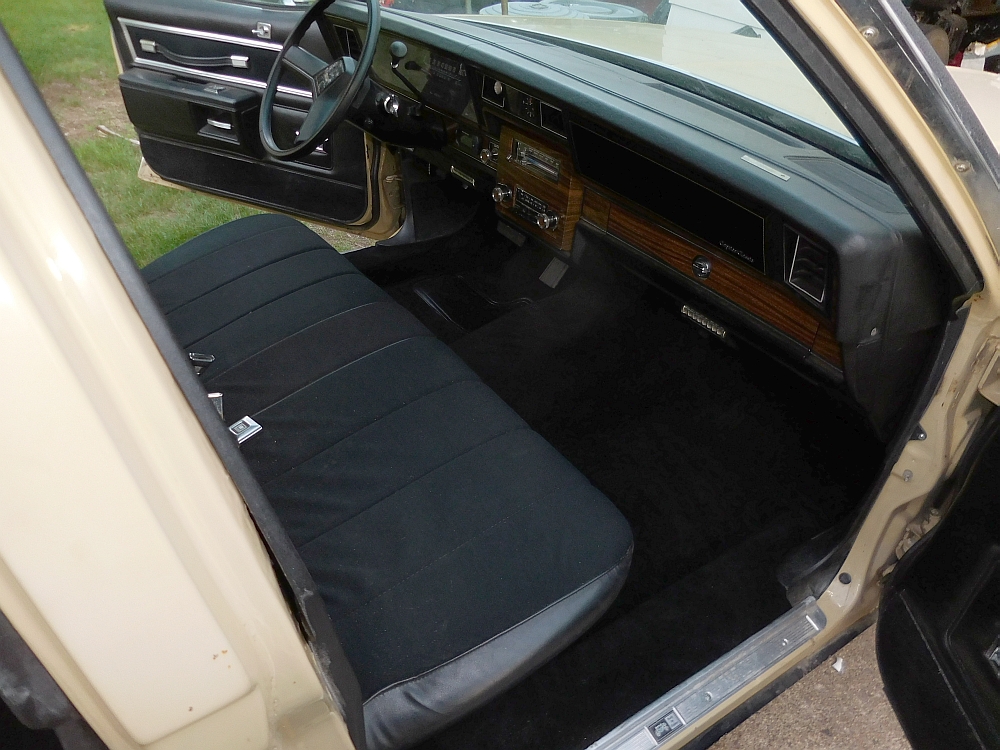 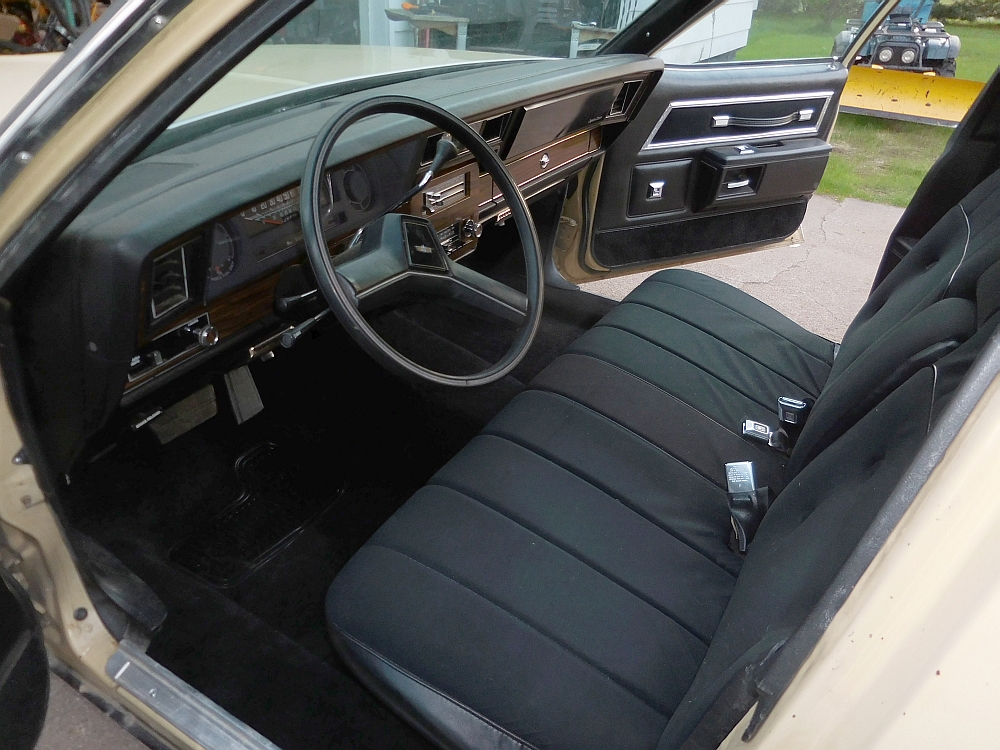 It's tough to get a good picture of the headliner but it came out pretty good. 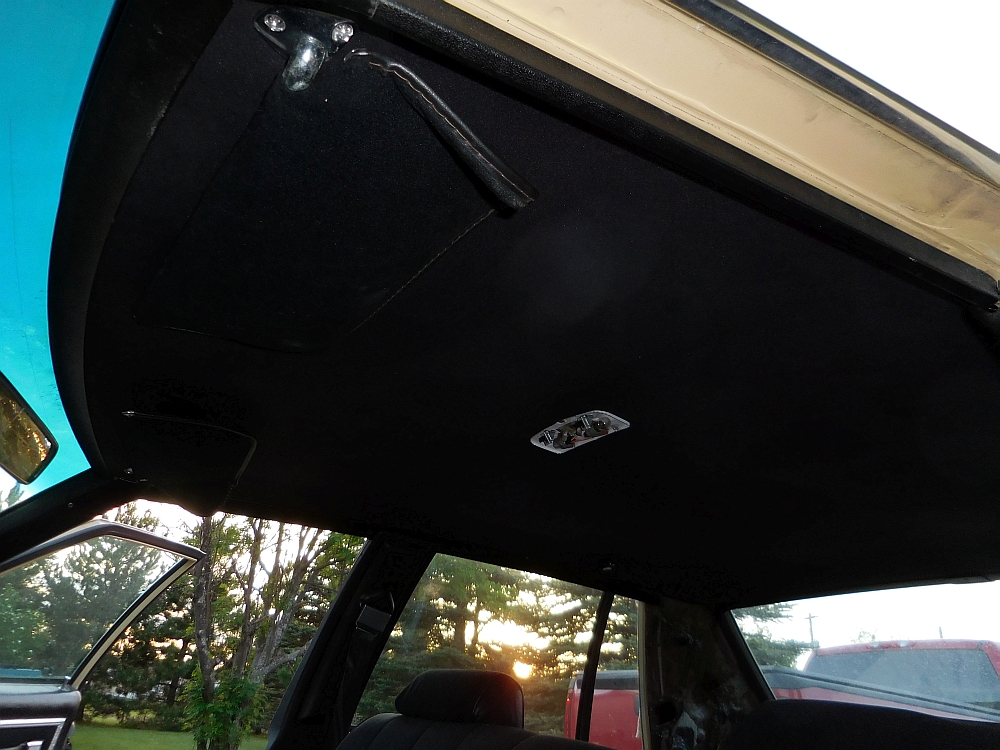 I still have some repair work to do on the right quarter panel so I'm not going to get the back seat and the rest of the interior back together until that is done.  There is some damage on the C-pillar and right rear door seems about the height of a mailbox. 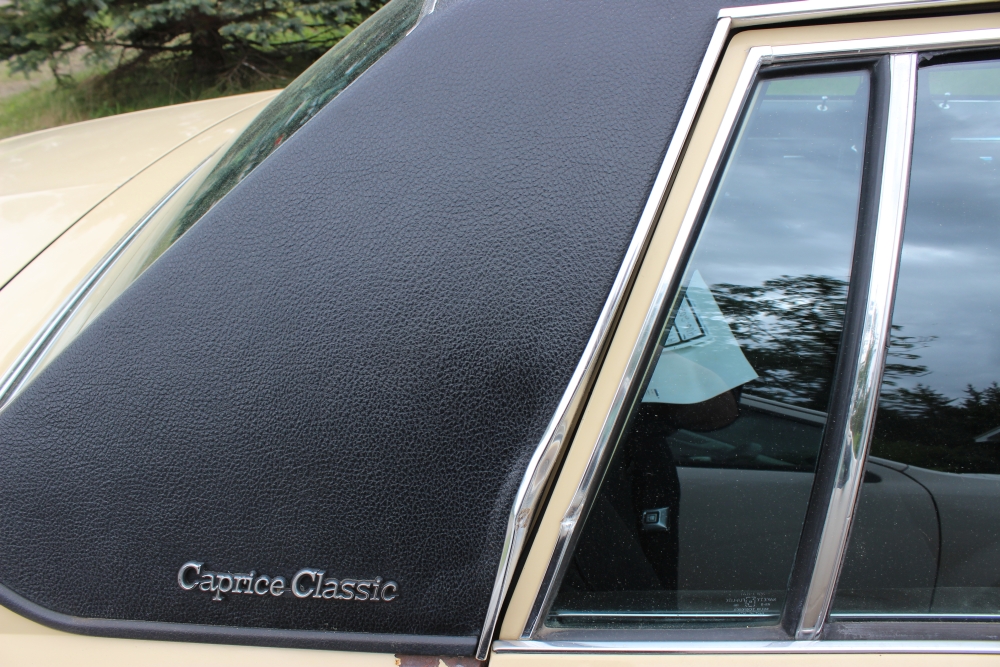 With the vinyl top peeled back it looked like this.  Of course the small rust spot peeking out at the bottom became a lot larger.  The last time I fixed a similar spot on an '80 Malibu there ended up being some pinholes through the metal. 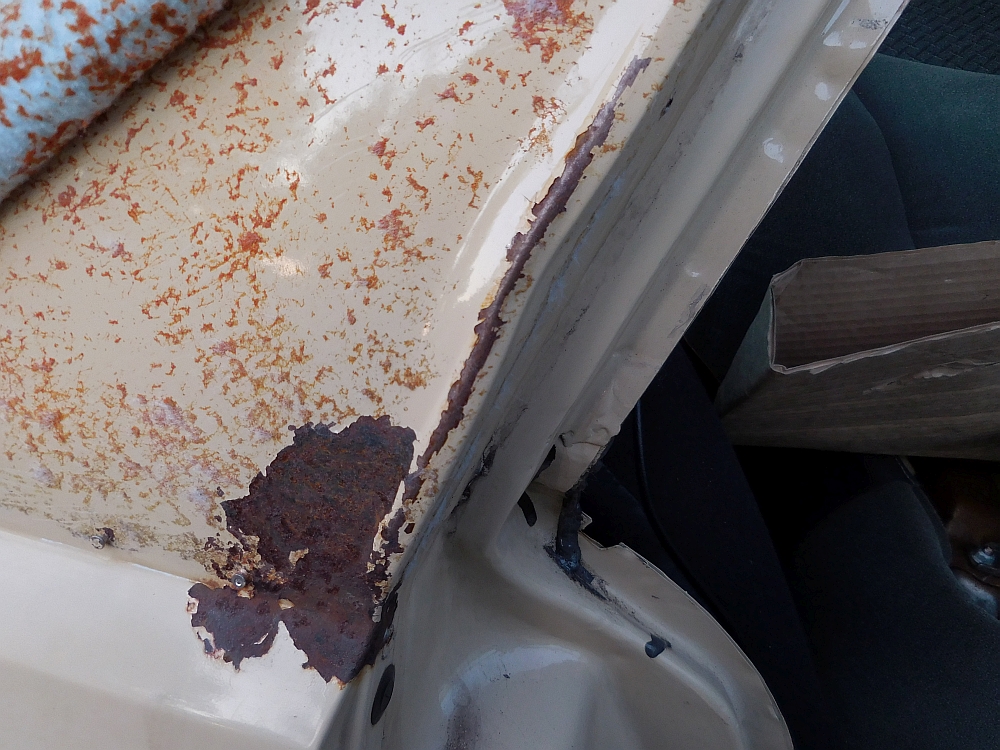 There was some access from the inside to get to the dent but not a lot.  I made a tool out of an old pry bar with a missing handle and one of those rear view mirror buttons that usually holds a mirror on a windshield to help with the job. 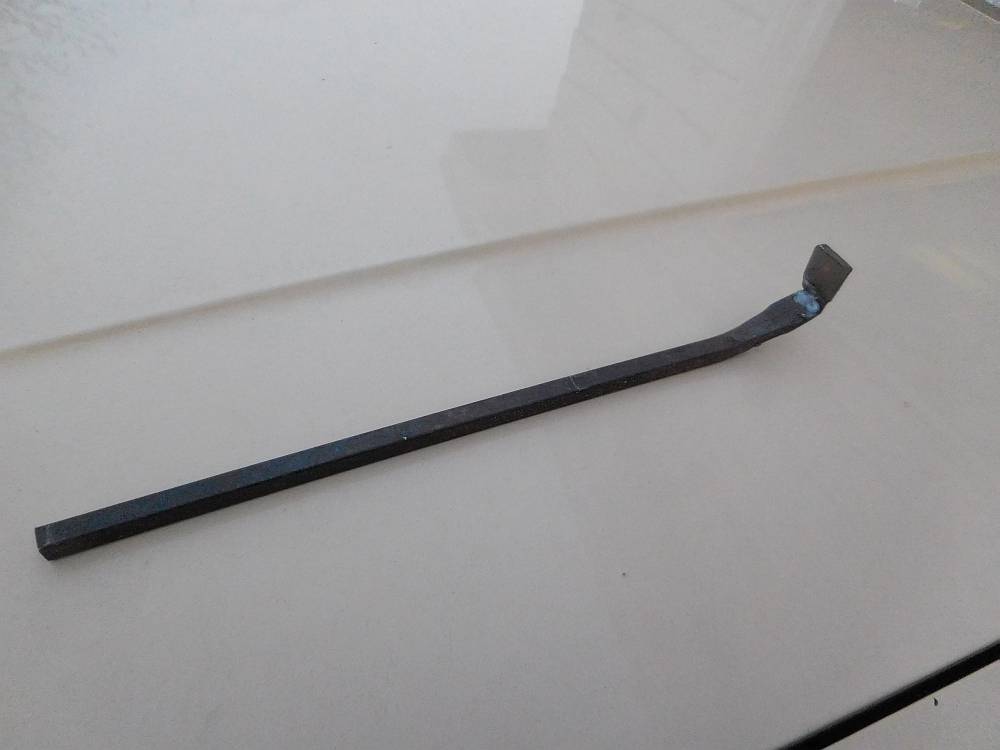 This is after I roughed out the dent with my custom made pry bar and is how the job stands right now.  I'm not sure how much more I will do with the dent since it just has to be good enough to not be noticeable with the vinyl glued back in place.  Next step is to clean up the rust with my vacuum sandblaster and see if there is enough metal left hopefully with no holes. 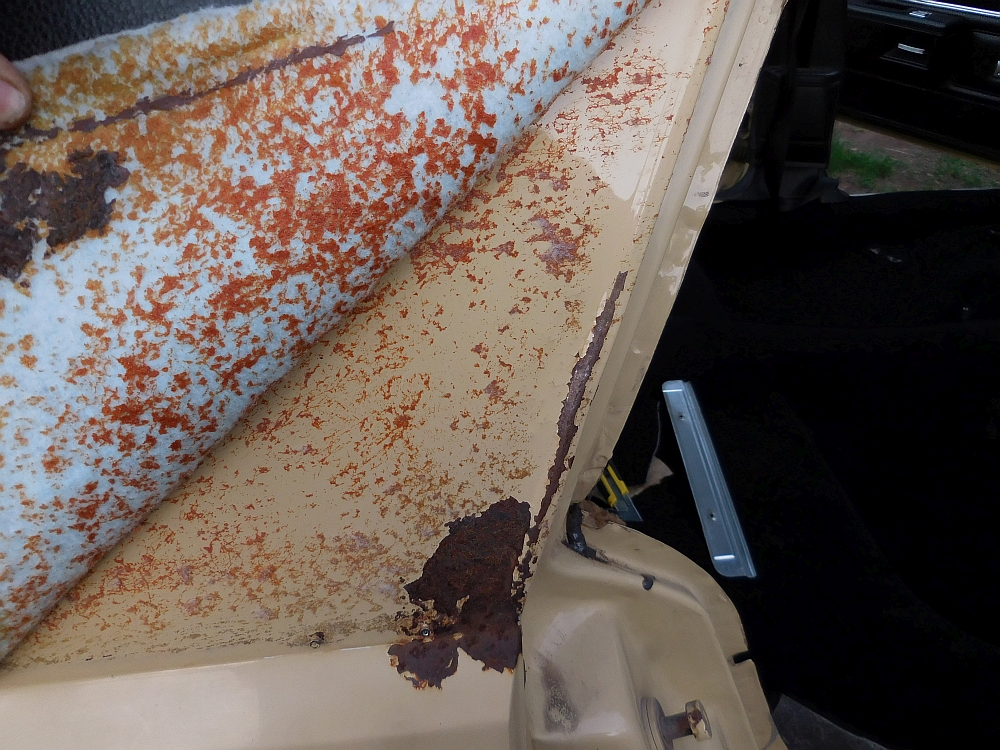 So, a little more repair work to do and a little paint work and I should be able to drive this thing this summer.  I lost all of last summer as far as driving the car goes because I just couldn't get motivated to get it done.
Gooched78Caprice

Danver wrote:my introduction to the common leaking heater box issue that is apparently so common on these cars. I pulled that assembly out and resealed everything following the advice found here in several different threads.  Fortunately the rust under the carpeting wasn't too bad, but it needed to be fixed before putting the new carpeting in.

Great job getting these projects knocked out. I had the same problem when I removed my carpets. For me what looked like surface rust initially, once I hit it with a wire brush I ended up having a couple nickel sized holes and about a dozen pinholes. When I looked under my car it looked like I was staring at the stars in the sky with the light shining through the holes. After pulling and resealing the heater box as well plus putting in "new" floor pans I am also in the midst of getting the interior all back in as well ... Keep up the great work and updates!

I noticed how prominent the dip is in the transmission tunnel (with and without the carpet) just ahead of the cross floor reinforcement where the power recliner motors protrude from the seat bottoms with 50/50 seats (only 1 is external on 60/40, even when both have power recliners). Funny how everything is designed for an option that was almost never seen in any B-Body. The seats are fully back (or close to it, though they are raised some) in these pictures;

It's a shame what happens under vinyl tops. I was adamant about not having a vinyl top when I bought my '84 Caprice new after seeing the problems with my '78 Impala coupe, especially living in Florida where the moisture gets under the top so quickly.

Just a minor update but a lot of hours went into this small step forward.  I've been tinkering with the small stuff at my home garage because it is convenient and that is where the car gets stored for the winter.  But now that I am getting to where I need to do some paint work I needed to get the car to my shop which is just up the street.  The biggest part of that project was cleaning out a place to fit it inside which took a lot of cleaning and moving junk around.  I still need a little more room around it to work but it is good enough for now.

I got the new wheels and tires on it recently and drove it out of the driveway for the first time in close to two years.  Felt good.  Can't wait to get the small stuff done so I can get plates back on it and put it on the road again. 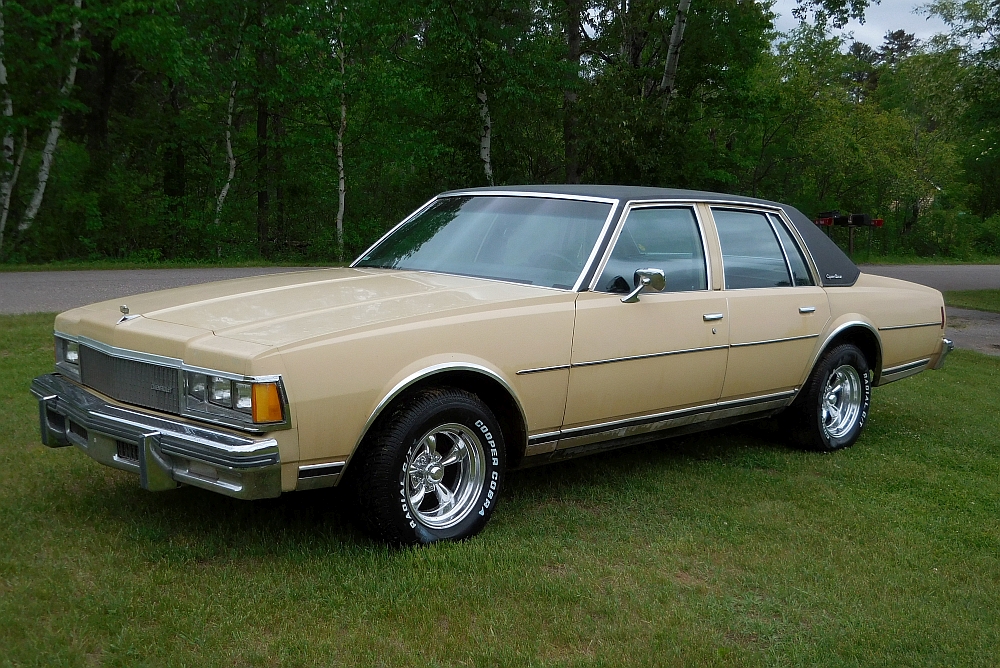 Getting the shop garage opened up enough to work inside took most of my effort but I still had enough time to at least get started.  I dug out the Vacuum Sandblaster that I picked up last year which is really nice for small jobs and for work in the winter when sandblasting outside just isn't that appealing. 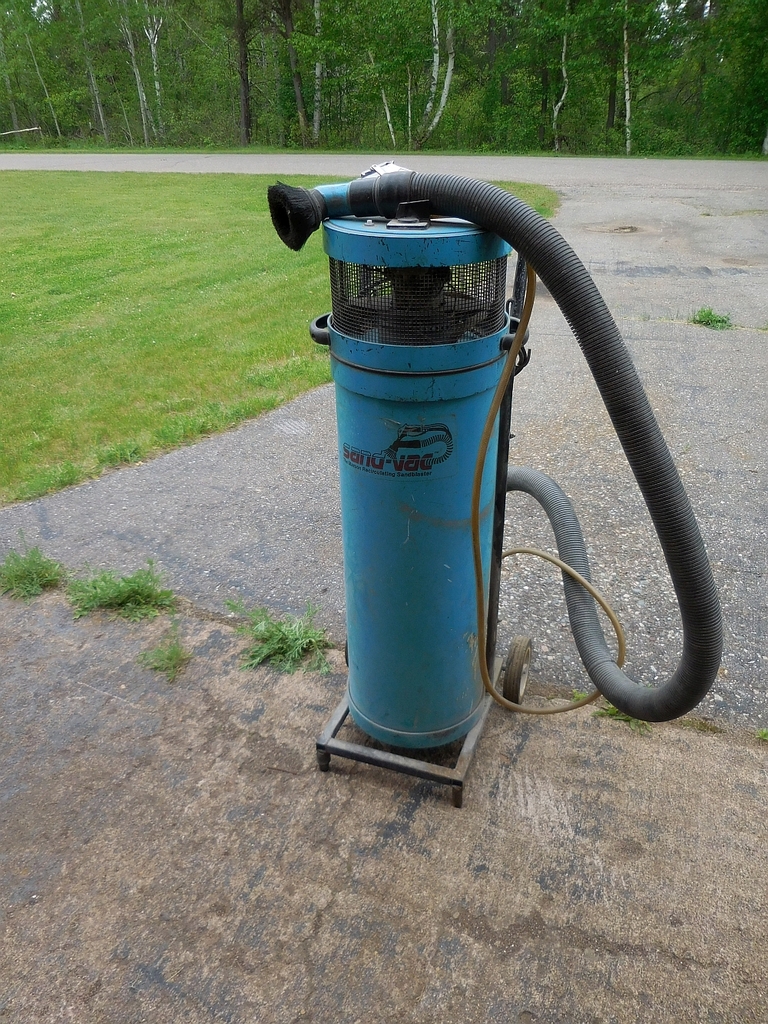 Looks like I got lucky and caught the rust in time.  There is some pitting but fortunately there aren't any holes like the last one I did that was similar to this under the vinyl top. 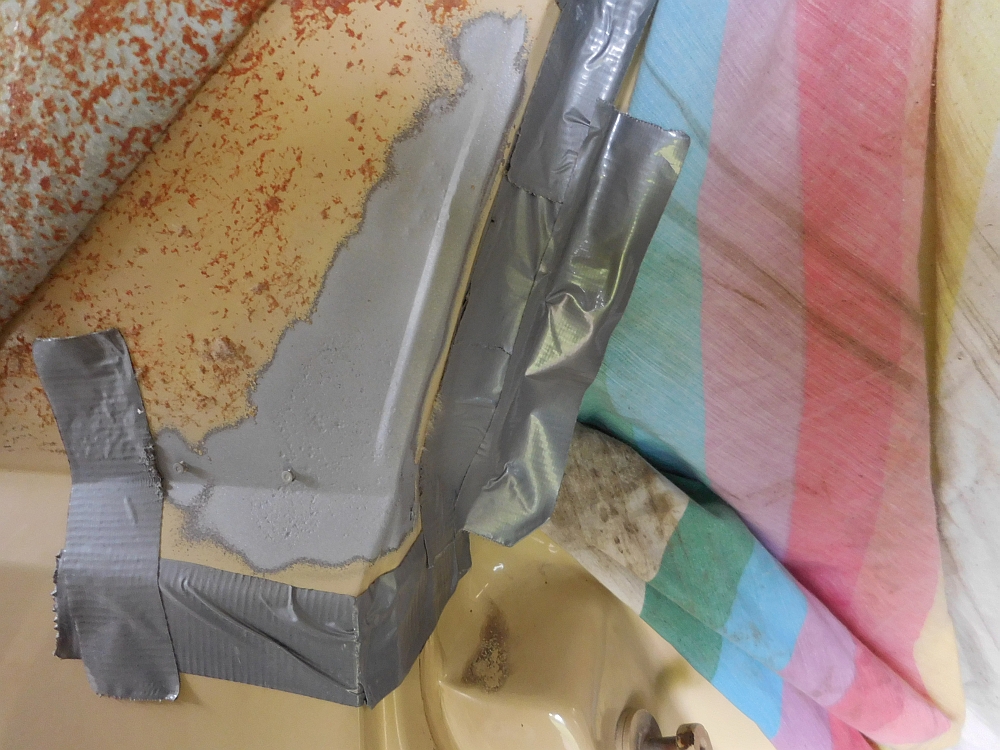 That was all I had time for.  I wiped it down as is and put some self-etching primer on it for now until I can get back to it.  But at least it is back inside now.
CorvairGeek

That cleaned up great. Should make for a 'good as new' repair.
Sponsored content