Hello. I'd like to introduce myself. My name is John. I've been lurking for a while, trying to absorb what I can.
I've been into (Chevy) cars and trucks since I was old enough to fetch a beer for my old man. My first car was my Grandfather's 79 Impala four door. He bought it brand new in 79 when he was an nypd officer. It was red with a red gut, bench seat. No comfort options whatsoever. It had red steel wheels and dog dish hub caps, 9c1 with heavy duty towing. 350/350 4bbl. Basicaly, the same as what he drove on the job.
He gave it to my father who was a body man for a buick-olds dealer. My father put a few touches like a remote trunk release with the button in the glove box and a cutoff switch under the fenderwell. My father worked in east new york in the 80's and 90's. I remember as a kid, several times they tried to steal it. I also remember him cursing a streak about the busted windows he had to replace. Eventualy, he just left it unlocked so they could get in without breaking anything. They never got the car because of the cutoff.
I remember one night on his way home from work, some drunken creature climbed in the back seat, thinking it was a gypsy cab. I asked him "what did you tell him?!" My father had mercy on the poor bastard and took the guy home.
That was my first car in 2001 when I got my license. By then it was a rot box with no headliner, a busted up dash, and a perpetualy sticky steering wheel. But man... It still had some balls. It needed help realy bad, but those cars were not exactly considered restoration worthy at the time. After a while of using it, she went to the scrapper. We kept the motor, trans, and a few other parts.
Soon after, i picked up a 78 malibu 2 door. 305 2bbl/200 metric with 2.xx gears. My buddy wrecked his 86 monte ss, so i grabbed whatever i could. Found a eaton posi rear with 3.55 gears for 75 bucks. Put a 4bbl carb and manifold, headers, made my own true duals with a set of cherry bombs. Notched my crossmember and welded it up really nice. It wasn't a 350, but she ran good and raised hell. It was quick enough to fake it, and looked damn good in black.
Add to that a few family station wagons, regals, delta 88's, 98's, beater pickups and blazers, el caminos,chevelles and who knows what else my father and myself have had and parted with over the years. Pops still has a 72 chevelle project.
Hurricane shithead (sandy) made scrap of the malibu. Along with my welder, sandblaster, spare parts, motors, transmissions and god knows how many air tools. It breaks my heart knowing whats burried in the scrapper. F*$× hurricane Sandy, but thats the way she goes.
So, here I am. I just picked up a '77 impala 2 door. She's got a 305/350 2bbl. 8.5 open rear with some 2.56 gears. Factory air conditioning is still intact, but needs attention. Its in decent shape and runs smooth. The two of us are just getting to know one another and we're taking it slow. The car reminds me so much of my grandfather's 79. I almost forgot how smooth these ol' girls were to cruise in.
I'm not sure what direction im going in with the new 77, but I think im going to keep it mostly original. Its maiden voyage was about 100 miles from south jersey. I was rolling about 75-80 mph the whole way up the jersey turnpike and I kind of liked the freeway gears. The factory exhaust wasnt blaring and the rpm's were right in the sweet spot.
She's gunna make a nice road trip ride.
I found door seals, window channel run, and outer window sweeps. Holy $. The window channel runs on the 77-79 coupes are a little tricky and ungodly pricey. I have a new carpet and moved the front seat back. Im 6'2" and i remember the 4 door having a lot more leg (gut) room. Im in the process of making front seat relocation brackets. Ironically, while drinking beer and eating pretzels.
It came with a set of fake centerline champ 500 wheels. Im not digging the look, but they are paid for. 295/50/15 on the back and 235/60/15 in front. The tires look good on it, if you like that 70s look. Luckily I do. The rims aren't my favorite. A buddy of mine just gave me a set of slotted mags from a 79 vette. 15x8. Hopefully I can do something with them.
Anyway, sorry for the long introduction. I look forward to contributing where I can. I appreciate those of you who have posted some very helpful info. Thanks for reading, or at least skimming. 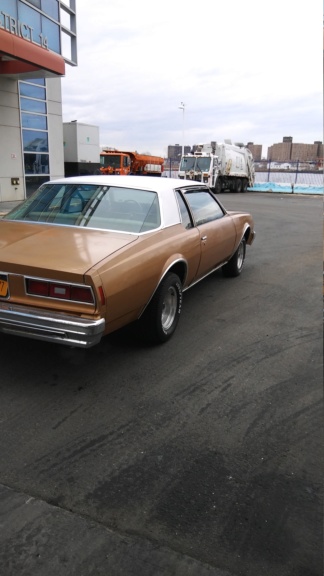 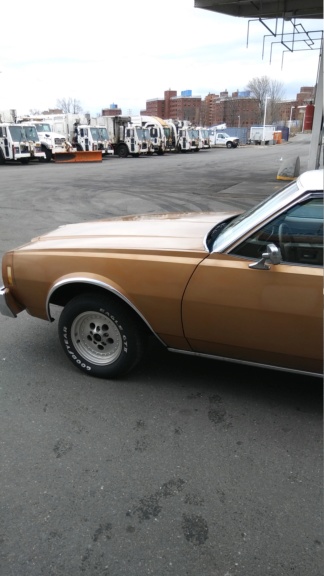